FTW stands for “for the win”–right? Don’t look on Urban Dictionary, let your brain have what little innocence is left. 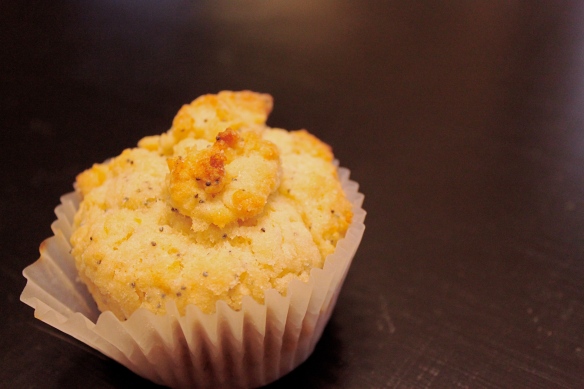 Look at you. You are God’s most perfect little muffin. I sort of wish I hadn’t eaten you about an hour ago, so that I could still look at you. And smell your lemony goodness. Sigh.

Are you like me? Have you tried dozens of muffin recipes only to have them come out sucky? Before I was a vegan, I would troll the internet and Southern Living cookbooks for perfect muffin recipes. Buttermilk, sour cream, voodoo, nothing worked. I always thought I was just “over mixing”–which I think is cookbook language for “don’t blame me. It’s all YOUR fault.” The crumb! The crumb is the best, most important part of the muffin. You  know, it should be soft, sort of like cake, but not spongy like cake. More like a cake met a cookie and then they began to make-out. You know? And the top should be a little sugary and crunchy, just a touch brown on the top and bottom. Oh, muffin. Why were you so elusive? Why could I buy bakery muffins and have them taste great, only to be crushed at home when mine were so tough and dry and sad?

No more! NO MORE! These muffins were fantastic. The crumb was perfect, they were firm and moist and just a little crumbly, with a crunchy top. And the lemon flavor was absolutely perfect. It didn’t punch you in the face, but rather gradually stole over your mouth like a ray of sunshine. And they were so much easier than the fiddly non-vegan muffins. I hate those muffins. Vegan muffins forever!

Recipe from Vegan Brunch. I’ve been hitting the Vegan Brunch pretty hard, I may need to ease off. But not until I make a whole lot more muffins. Including an Almond Poppy Seed Muffin I’m dying to invent!