I love October. It is easily my favorite month of the year, followed only by December because it has my birthday in it. And because I’m still delighted by snow in December, not horrified by it and shaking my fist at the sky like I am in February.

Anyway, October is also the one time of year I drink beer. I don’t really care for beer, but out of due respect to Oktoberfest, and the one and a half years of German I took in college, I down half a bottle and call it a day. 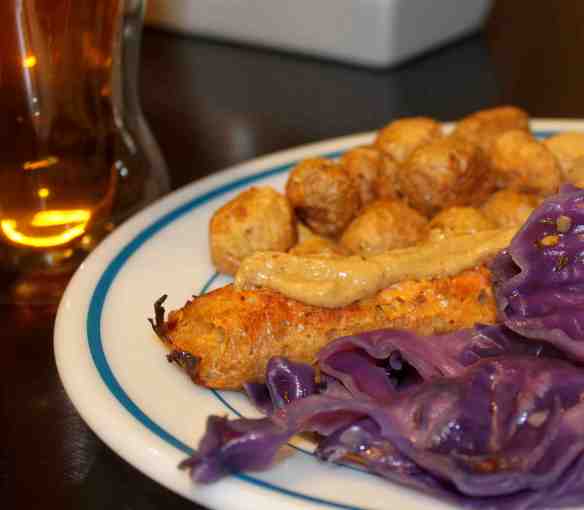 I made Beer and Cheese Bratwurst! Well, obviously not really bratwurst, but it was still plenty delicious. My only possible complaint about them was that they were too sweet, but I find a lot of vegan meat to be sweeter than it’s evil meaty counterpart. Anyway, here’s the recipe:

First, mash the beans really well with a fork, then add all the dry ingredients (including fake cheese). Mix them together really well before adding in the wet–the vital wheat gluten will make it come together super fast. Roll your sausages up in foil (see these directions) and place in your steaming apparatus. Steam sausages for 40 minutes, then let rest for at least an hour in the fridge. Reheat by baking (in a conventional or toaster) oven at 350 degrees for 10 minutes. Or grill!

As delicious Oktoberfesty sides to the sausages, I made baby potatoes roasted with onion powder and garlic powder (it makes a delicious crust on the outside) and some braised cabbage (basically following the recipe for seitan and cabbage from Appetite for Reduction but with no seitan). I didn’t know you could cook red cabbage the same as green–but you can! And it’s just as good! If not better!

So get your Oktoberfest on!

But really, from the outside this dinner seems like it would taste weird. Like some sort of vegan nightmare of seitan, cabbage, and brown rice. I think it’s what omni’s fear that vegan eating is like. And even as I’m assembling it (and I’ve made this dish over and over), I think to myself–this can’t possibly taste good? Right? Braised cabbage?

But it does! IT DOES. This is one of my favorite recipes from Appetite for Reduction. I can’t get enough of it. And it is so incredibly simple, and is made up of just a handful of super simple ingredients. How is it possible? HOW?

Error: Twitter did not respond. Please wait a few minutes and refresh this page.