Of course, these pancakes are beautiful. Bright yellow, smothered in wild blueberries–there is no way to go wrong with that.

See what I mean? There’s a problem, though, and it comes from adapting a recipe too far. Oh, Engine 2 Diet, you can’t take all the sugar out of a recipe with the juice and zest of two full lemons! Since this recipe is adapted from Vegan with a Vengeance, I could check the original–eliminating the oil is one thing (since pancakes sort of don’t need it, if you grease your pan appropriately) but the sugar? THE SUGAR? It’s sort of like thinking you’re going to drink a big glass of lemonade, and what you get is a fresh glass of straight lemon juice. With salt in it.

My husband called these “bitter cakes” for a very good reason. Next time I make them–and I’m determined to make them again!–I’ll add only 1 or 2 teaspoons of zest, the same amount of lemon juice (it’s about 1/4 of a cup), and a tablespoon of raw sugar.

There were two exciting discoveries that came from this breakfast, though: 1. I LOVE soy yogurt. I think I tried it early on, when my tastes were still changing, and it seemed weird. But I ate a bit of the vanilla yogurt that went into these and it was amazing. So, yay! 2. Blueberry Syrup. I made this recipe off the top of my head, and then discovered that it was nearly identical to the one in VwaV. How do I do it?

Combine all ingredients in a small saucepan over low heat. The syrup should come together in the time it takes to make all your pancakes, and be gently warm–not burning hot. So, about 15 minutes.

My mom was out visiting, which is a perfect excuse to make some really killer coffee cake. And sheesh, did this ever take the proverbial cake. So moist! So sweet! So crunchy! I pretty much wanted to slap anyone’s hand who tried to reach for a slice.

I believe that the Post Punk Kitchen has a version of this up…yep. I used the recipe from Vegan Brunch, but it amounts to the same thing. I’m kinda wondering, though–do you think there’s any way to reduce some of the fat content in this? Like, if, say, I wanted to eat it all the time. I can’t be downing 3/4 cup of oil for every cake. Even though it’ll last me 4 or 5 days of breakfasts. Someone. Help!

You know I love cinnamon rolls. It was practically the first thing I blogged about! I’d been making them with dough from english muffins, because it was easier–I never tried the cinnamon roll recipe in Vegan Brunch until this weekend. I baked up a MONSTER batch of these for our community bake sale, and these were the big hit. HUGE. People bought them, ate them, and then came back around for seconds. I have to agree–this cinnamon roll recipe is out of the park delicious.

Basically, you follow the directions exactly, but add about 2 tsp of maple syrup to the margarine spreading step, and 2 T of frozen blueberries before you roll it up! I like mine without icing, so I didn’t even bother with that part.

Also, wanna know a secret? If you live near the restaurant Texas Roadhouse (I won’t link, it’s not vegan, look it up yourself), and have had their bread you’ll know what I’m talking about. That bread is insane. My first time there I easily ate 10 rolls. I was confused about how that much bread could fit in my stomach at one time. I digress–if you made this recipe just using the dough, and didn’t put any of the filling in, it tastes JUST LIKE that bread. But VEGAN. VEGAN!!! I know. It was all sunshine and lollipops and happiness over here at my house. Hooray!

So before I became a vegan, but after I stopped being vegetarian, I fell in love with a Southern-style BBQ sandwich known as the “Pig n’ Slaw.” But since I will no longer be enjoying pig with my slaw, I needed a veganized version of that sandwich. Ladies and gentlemen, I bring you the Seitan Burnt-Ends Slaw Sandwich. It is real, and it is UNBELIEVABLE.

That’s it! Now, heat up your cast iron skillet with some cooking spray over medium-high heat. Take your seitan and cut it into bite-sized strips. Place the seitan in the skillet. If your pan is on the smallish side, you may need to cook the seitan in two batches. If the seitan is sticking really bad, spray it again, or deglaze the pan with veggie broth or tomato juice. When the seitan is nicely browned, turn off the heat and pour as much sauce as you like into the pan. I like my BBQ really saucy, but if you just like a thin, non-messy coating, go right ahead. Now just pile on the coleslaw to make a delicious sandwich!

This was so incredibly easy for something that turned out amazing. I’ve had really good luck with this seitan cooking technique, it takes away some of the rubberiness of the wheat meat. I could eat this every day, but I shouldn’t–I really shouldn’t.

I made a berry cobbler for dessert, but it didn’t turn out like I would have liked–a little doughy and not as sweet as it should be. I’ll work on it some more and pass the recipe along then. But for now, I leave you with a sweet photo!

I’m going to be honest here: I totally deviated from the recipe in Vegan Brunch, because I didn’t have soy yogurt. It’s just not something I keep in the house, because I rarely, rarely use it. Also, I’m still involved in my quest to rid myself of white whole wheat flour (blech), so I used it instead of the all-purpose. What emerged is the muffin you see before you, slightly darker, slightly flatter, still delicious.

Mmmm…Earth Balance. I don’t like to bake with you (though I will), but I do like to spread your buttery goodness on things. This muffin was obviously not as cute and fluffy as it should be, but the blackberries and blueberries made up for the lack of beauty.

Once again, I would like to express my appreciation for the crumb of vegan muffins. SO MUCH BETTER than your average muffin. I don’t know how it’s possible. But it seems difficult to not have these come out delicious, even when you make substitutions.

Here is my altered recipe:

Basically, follow the directions from Vegan Brunch: 375 oven, grease the muffin cups. Mix all the dry ingredients, then all the wet in a separate bowl. Add the wet to the dry, and mix VERY GENTLY. Then, fold in the berries. It’s okay if the mixture looks a little floury. That’s how you want it. Bake for 25 mins, and check for doneness by inserting a toothpick or cake tester into the muffin. Sometimes you’ll get berry residue on it, but check for raw dough. If it’s dry, take it out! Nothing tastes worse than an over cooked hockey-puck muffin.

I’m starting to believe I may be what’s known as a “Chandrist” vegan, because I basically only own vegan cookbooks by Isa Chandra Moskowitz (and her writing partner, Terry Hope Romero). I have some random vegetarian cookbooks, but I always, always, always come back to their recipes. And oh, how I love Vegan Brunch. 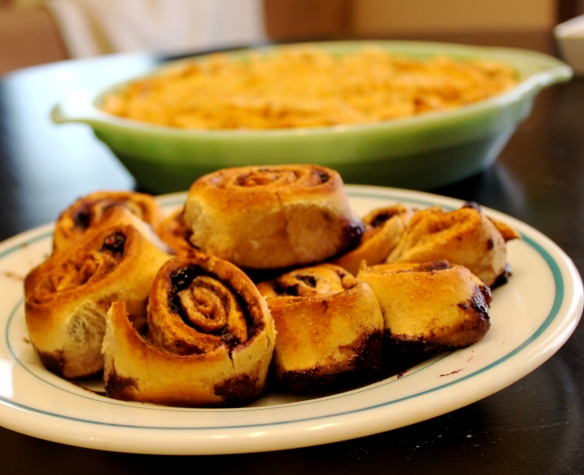 I kinda stumbled onto the recipe for these cinnamon rolls, since they aren’t the ones mentioned in the book. I like to make breakfast sandwiches for my husband to take to work, and I’m too cheap to buy english muffins. $10 shampoo? Yes. English muffins? No.

So I followed the Vegan Brunch recipe, but I rolled them out too thin. I had a ton of leftover dough (and some flat english muffins…he still ate them). So I rolled it out, smothered it in goodness, and *BLAM!* maple blueberry cinnamon rolls were born!

Roll the dough out as flat as you possibly can on a floured surface. I’m talking paper thin. Then, mix the spread with the syrup and nectar. Smooth the mixture out onto your dough. Sprinkle with blueberries and cinnamon. I really, really like to use lots of cinnamon here, it gives it a lot more flavor. I adore the cinnamon from Costco. It comes in a huge bottle, and tastes magical. It’s $4! Then roll everything up as tight as you can without losing all your berries.

Cut the rolls into 1-inch thick circles, and put in a greased baking pan. I actually use a bread pan for this, it works great. Let the rolls rise in a warm place for 30 mins, don’t worry, they probably won’t quite double in size. If it looks like the pan is filling up with blueberry juice, that’s exactly what you want to see. Bake at 350 degrees for 12-15 mins, watch closely that they don’t burn, since the tops are so sugary. Serve warm. 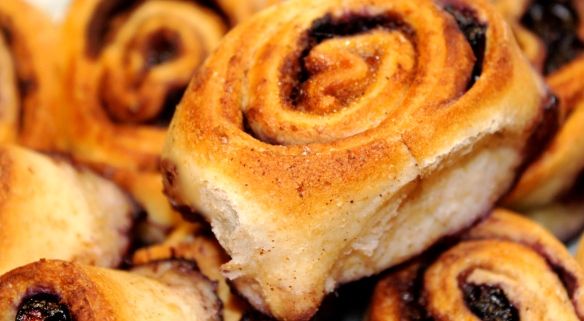 Just for fun, I’m including a photo of the Caramelized Onion Quiche I made from Vegan Brunch. So cute! If only I’d used fresh parsley instead of dried to garnish it–so much cuter. But fresh parsley always goes bad in the fridge so fast. Lucky for me, spring is arriving and I’ll have herbs galore in about a month. Hurrah!

Seriously, look how horrible my crust turned out. Crust is my worst enemy. Either it’s too dry and crumbly, or it’s too wet and comes out all crackery. I don’t get it! All I’ve discovered is that shortening seems to work a lot better than margarine for me, but I miss the buttery taste. I gotta get my hands on some (relatively) healthy shortening, stat!

Error: Twitter did not respond. Please wait a few minutes and refresh this page.